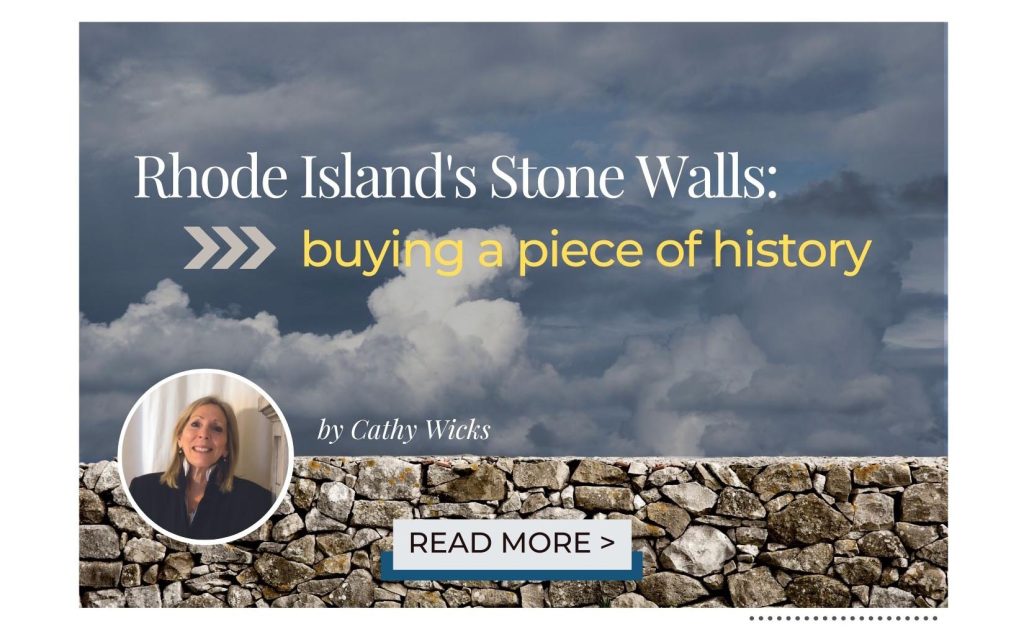 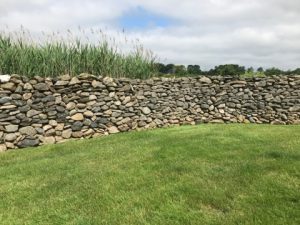 If you buy a home in Tiverton, RI chances are stone walls define the boundaries. Stone walls have a deep history in colonial Rhode Island. Used by farmers to protect crops, corral livestock and mark property boundaries, these blockades are a testament to colonial craftsmanship. Because the Ocean State’s agricultural heritage once dominated our rocky terrain, it’s now replete with these serpentine crags. They scale hills and valleys, line busy thoroughfares and separate neighbors. They’re as American as apple pie and Independence Day.

Thanks to Mother Nature for providing the natural materials, it was New Englanders, and particularly crafty Rhode Islanders, who saw an opportunity to harvest these stones to their benefit. Manuel “Bob” Medeiros did just that. He pulled boulders from the ground to construct a barricade around his property on the banks of Pamomquit Pond in Tiverton.

“It started out as a white picket fence, but he decided to do stone for hurricane protection and privacy,” said Medeiros’ daughter Donna Clark. She owns the property and is selling an adjacent vacant lot that features her dad’s handiwork.

“It’s six feet tall and almost seven feet thick in places; 1,000 feet of stone wall around an acre of land. It’s held together with almost no cement and took him two and a half years to build. He was proud, and made sure people saw the walls and how much work he put into them.” 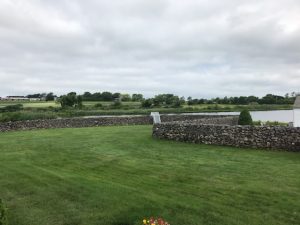 Stone walls tell the land’s particular story, and this tale is one of hard work, survival and success, of a Portuguese family who wanted more. Kids grew up here, searched for bugs in the yard, played on the pond’s sandy shore, went fishing and climbing and adventuring. This is what you get when you buy a piece of property. It’s more than just acreage and a building. You inherit memories, history, and a responsibility to be a good steward.

“My parents bought this property in 1954, and dad built this to be a summer house, but they loved it so much they moved here permanently,” Clark said. “It was an open field with berry bushes. And now there are so many memories here.”

BOULDERS AS BIG AS A GERMAN SHEPHERD

Seventeen majestic swans floated by as we climbed over the fortress of stone to see the pond and jetty, which Medeiros also built with his hands and a pickaxe. With boulders bigger than a German Shepherd, it towered like a sentry, as if guarding its interior residents from harm. In other spots, especially on the vacant lot, the wall is shorter, and provides more of a quaint artistic touch bordering the well-tended garden of Calla lilies and hostas.

Neighboring farmland, marshes and conserved wildlife sanctuary protect the development of this rustic area, and preserve its quiet ways. The history of the farming life is alive here, so the charm will remain. And whomever comes in to shepherd this land into the next generation, the solid stone walls will guide them. “I can’t imagine anyone buying this land and tearing these walls down,” said Clark. “No properties have stone walls like this, and if they do, they’re falling down. I’ve never seen such a solid stone wall like this. It’s not going anywhere.”

See more of this property and others by Realtor Cathy Wicks here. 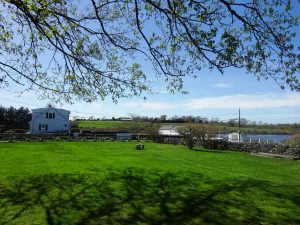 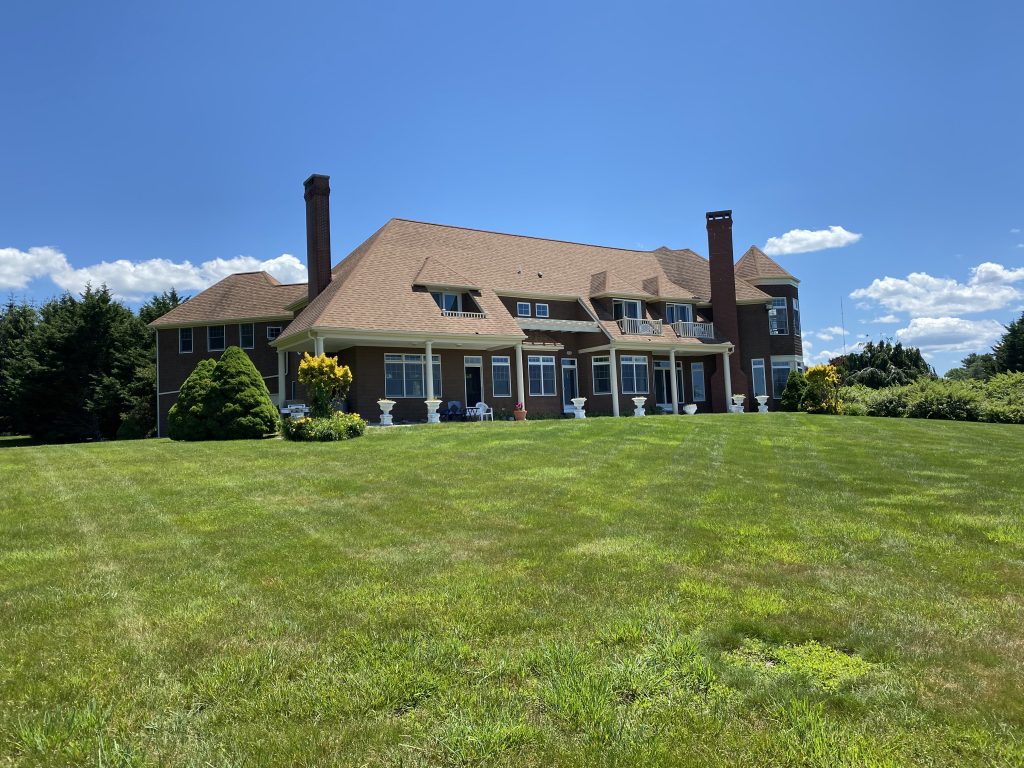 Hogan Associates announces the June 15, 2021 sale of 112 Riverscape Lane in Tiverton, R.I., a stunning custom-built home located off Tiverton’s renowned Nanaquaket Road. The home sold for $2,250,000. Gordon King of Hogan Associates represented the Buyer, and Kendra Toppa of Lila Delman Compass represented the Seller. This is the highest recorded sale in Tiverton since 2018.

112 Riverscape Lane is a remarkable property; ideal as a year-round home or a vacation retreat. It is located at the end of a quiet cul-de-sac and situated on three acres of lush, professionally manicured landscaping. Perched above sea level, the home enjoys sweeping, 180 degree views of the Sakonnet River.

This 5,400 square foot home was custom-built and is brimming with sophisticated details. A gracious, light-filled entry leads to formal living and dining areas with crown moulding, exceptional built-ins, and panoramic water views. The first floor also offers an eat-in kitchen with an adjoining family room, as well as an executive office. On the second floor you’ll find a luxurious master suite and two guest rooms, all with water-facing balconies. Outside, the sweeping lawn rolls to 250 feet of private shoreline. A deck offers the perfect place for sunset cocktails, while stairs lead down to a secluded beach area. The property has an existing mooring, with completed plans and permitting in process for a private dock that the new owners can enjoy for years to come.

“When my clients saw this home, they knew immediately it was ideal for their growing family,” said Gordon King of Hogan Associates. “The safe and secluded location, the spacious floor plan, and the easy access to a private beach was the perfect combination to meet their needs.”

Hogan Associates is an independent Rhode Island brokerage founded by Leslie Hogan and Matt Hadfield, two of Rhode Island’s most experienced agents, each with a strong track record of success in the Greater Newport real estate market. Hogan Associates’ 36 sales agents work on behalf of buyers and sellers of fine properties in the coastal communities of southern RI. The firm has offices in Newport and Middletown and is a member of Who’s Who in Luxury Real Estate, an elite broker network with more than 130,000 sales professionals located in approximately 880 offices in 70 countries and territories. In 2020  & 2021 Hogan Associates received Newport Life Magazine’s Best of Newport County award. For more information, visit HoganRI.com.