Aquidneck Island Real Estate in 2017 was a wild ride. Now that the year has come to a close, what exactly happened in Newport, Middletown & Portsmouth? What do we have to look forward to for 2018?

What everyone really wants to know; what happened to values over the past year? The constricted inventory over the years finally caught up with us with price increases across the board. Newport’s single families brought home the gold with a trailing average price increase of 25.76%! Compared to Middletown’s 7.6% and Portsmouth’s 10.3%, Newport won by a mile. 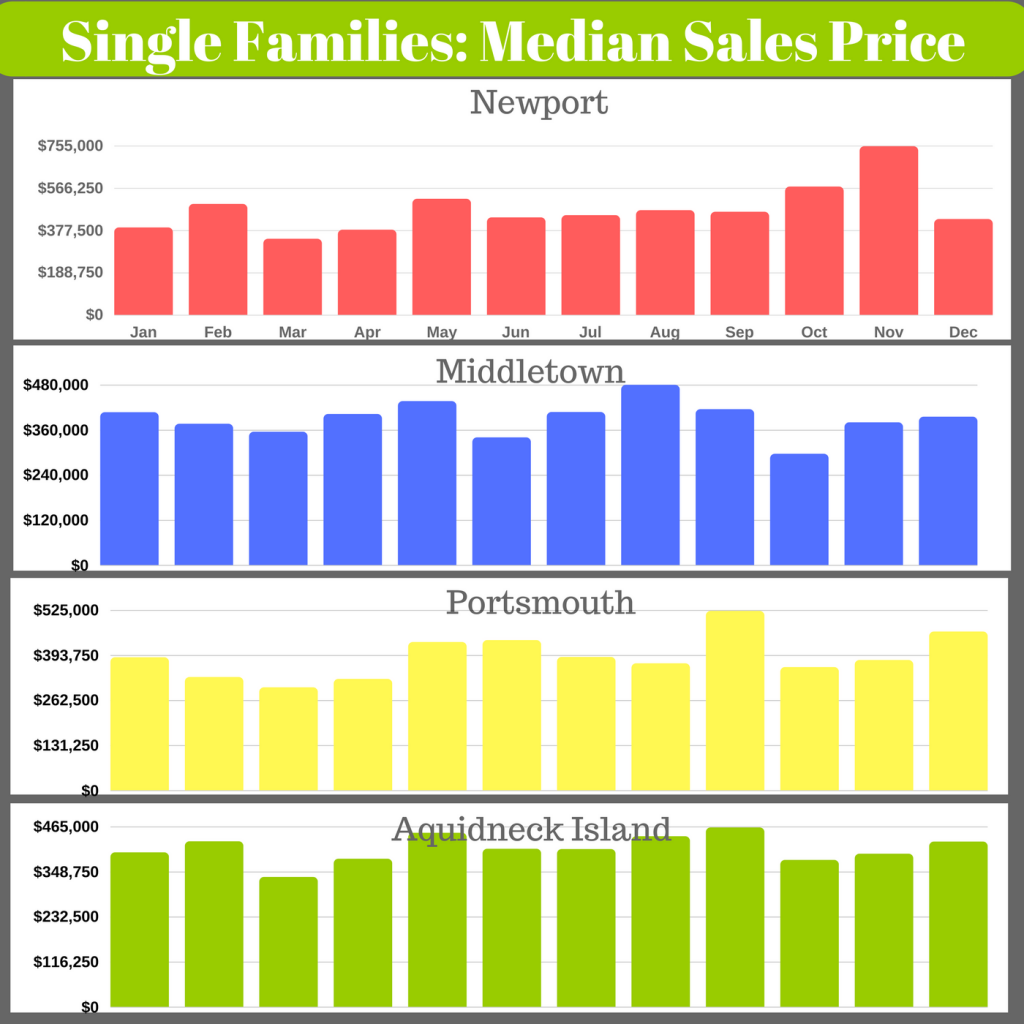 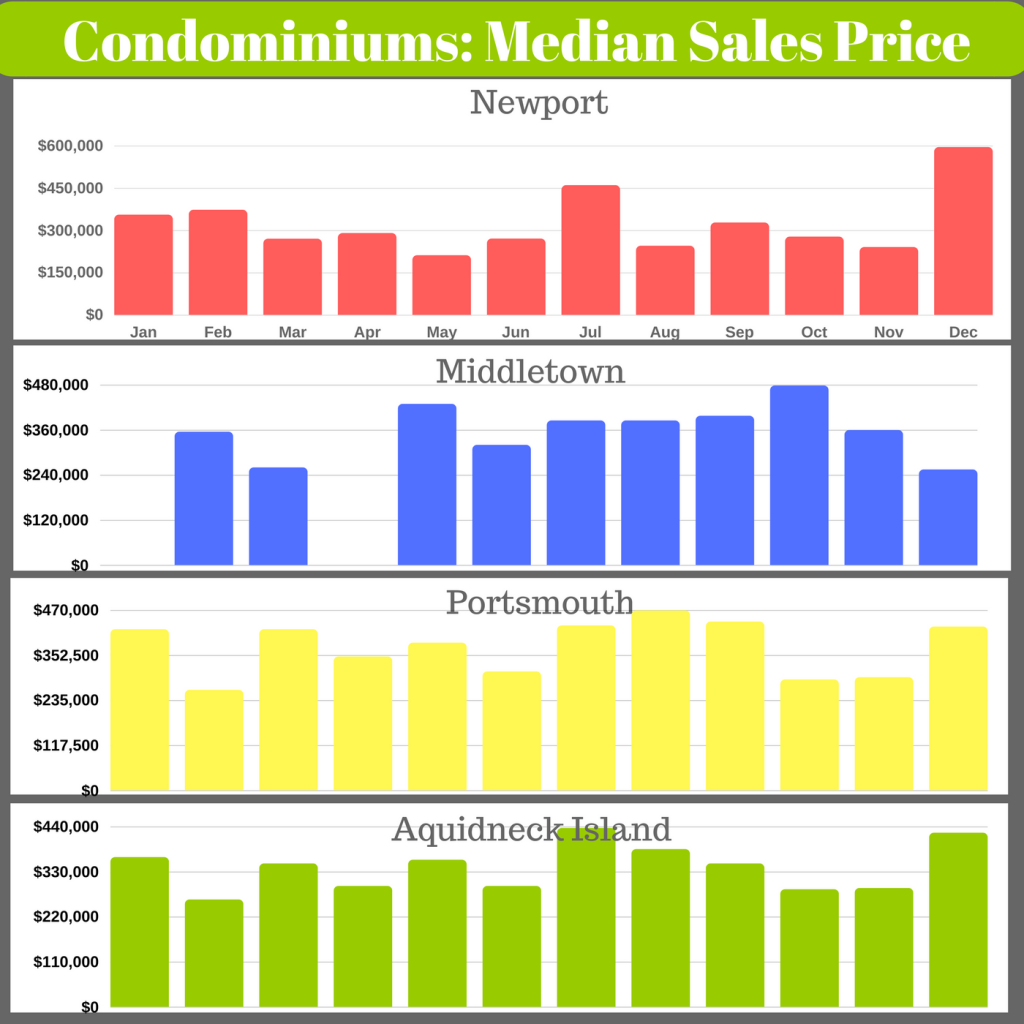 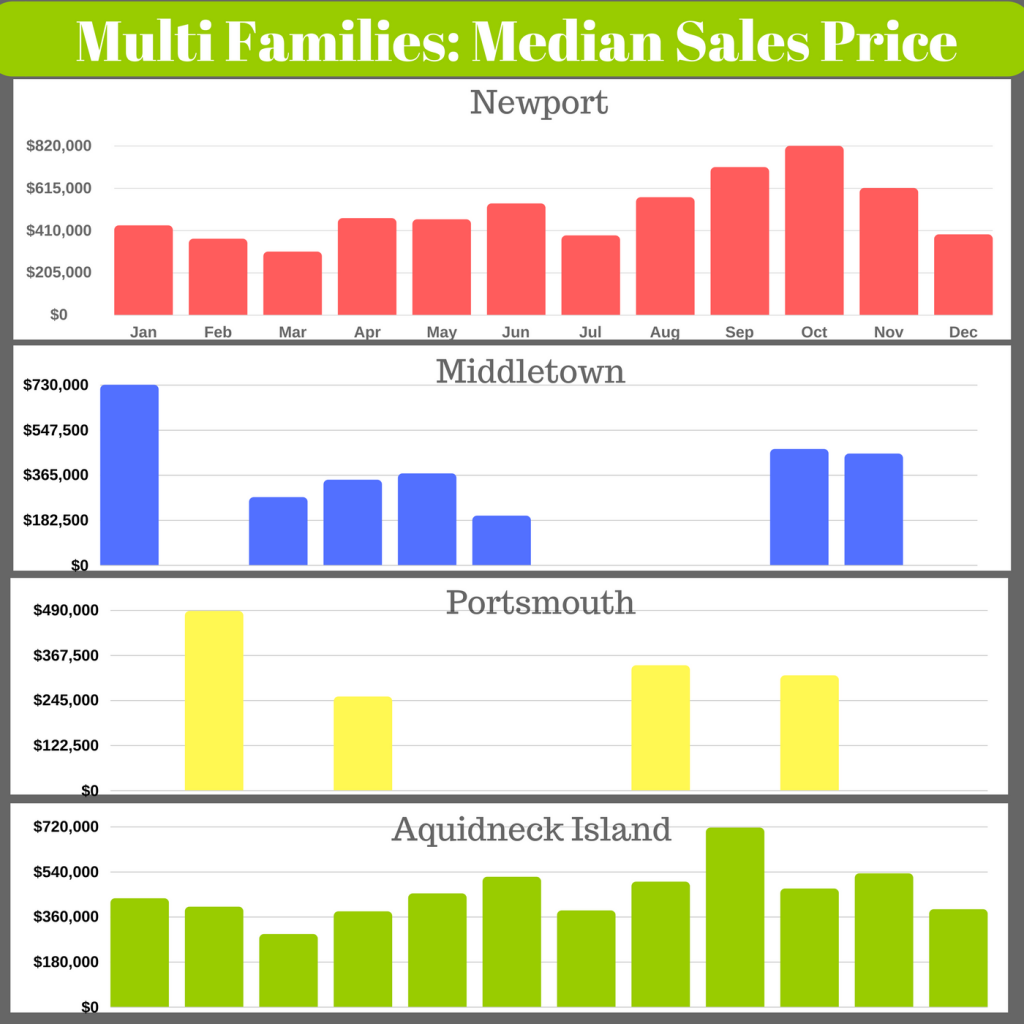 Some products fared better than others, again, mostly due to inventories. A few additional condos were added to the supply this year across the island (Eastborne Lodge, Seafare, Prescott Point and the Newport Beach Club) For example, condos in Newport only saw a 6.4% Trailing Average gain while Multi Families saw a 19.87% increase in value.

There were 14 new construction single families SOLD across Aquidneck Island in 2017, accounting for only 2.09% of sold inventory. Compared to roughly 9% nationally, new inventory in our market is tough to come by, further adding value to the existing housing stock.

Overall we had a great year across the board for values across the Island. Here’s a look at the past 8 years. We’ve clearly climbed out of the trough of the market and with inventories being squeezed the way they have been, we can expect this trajectory to continue. 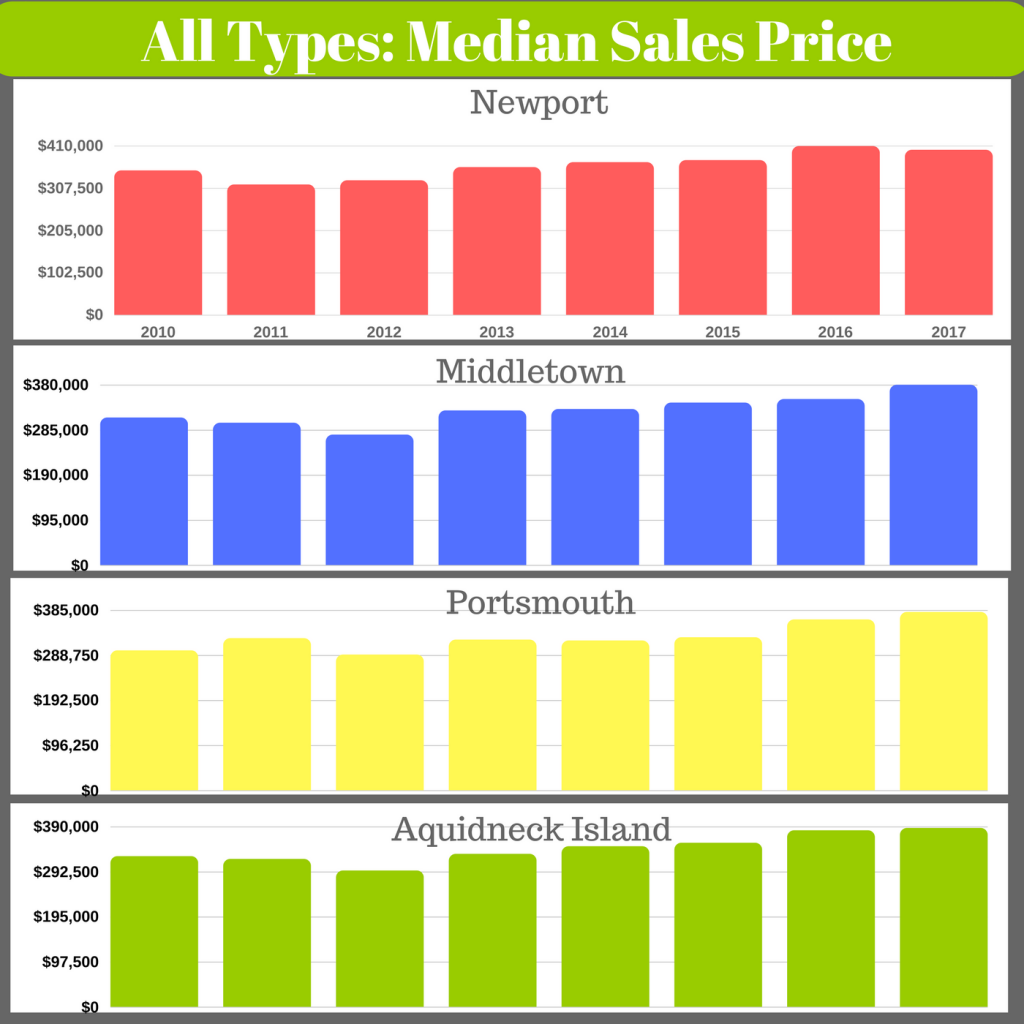 All this talk of inventories, we should look at inventory levels for the year.

Overall, Aquidneck Island saw a 30.36% decrease in total inventories (Condos, multi families & single families). Meaning if you were shopping for a house in 2016, you’d have nearly a 1/3rd more inventory to consider.

Low inventories do tend to push up pricing, it also makes home shopping very frustrating. If you’re a buyer in this market, don’t be afraid to approach homes that are a little higher than your price range and don’t shy away from “multiple offers” You win some, you lose some, but in the end you have to play to win.  Submitting an offer at a price you feel the home is worth is not over paying no matter how many offers are on the table.

If you’re selling in this market don’t just throw a number to your listing, price it well and have the market deliver you your highest and best offer. Preparation is key. Having your listing shine will draw in the most from the buyer pool and will ensure you garner the highest price. 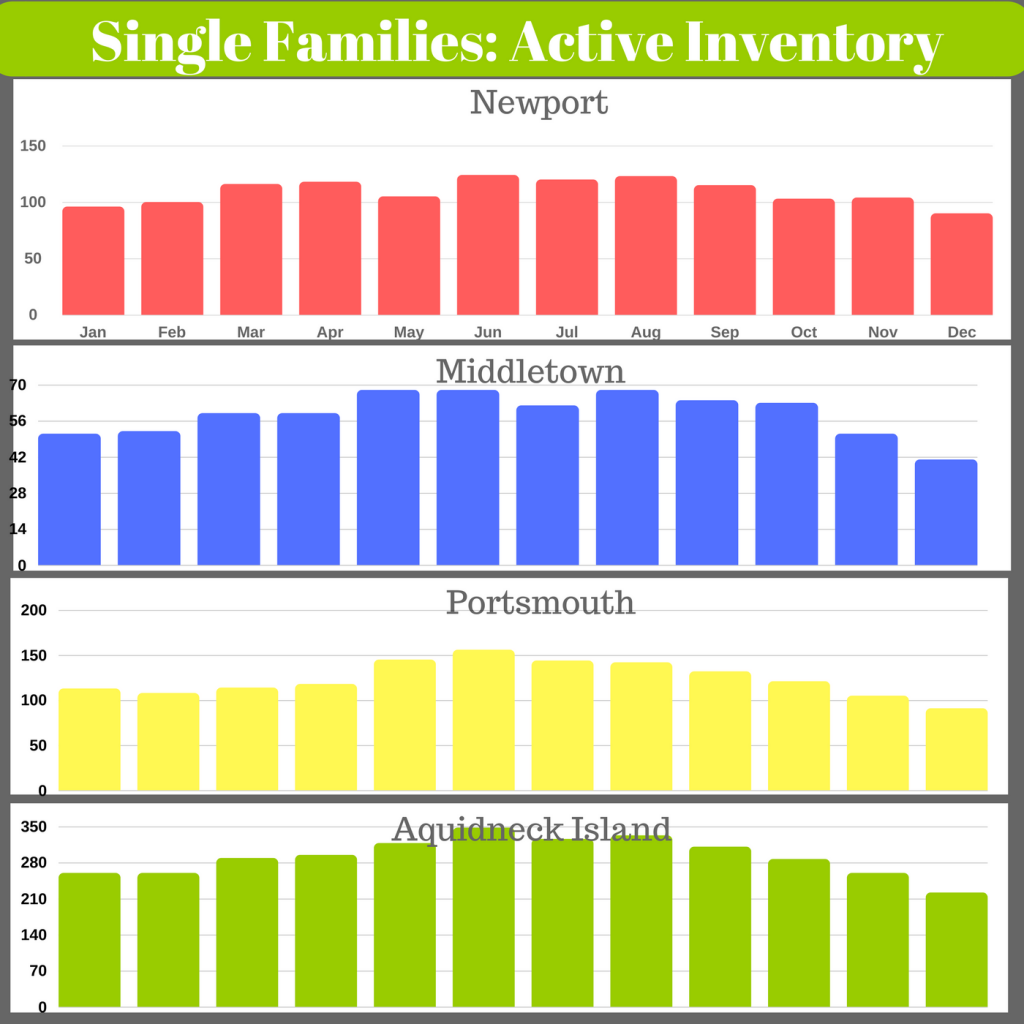 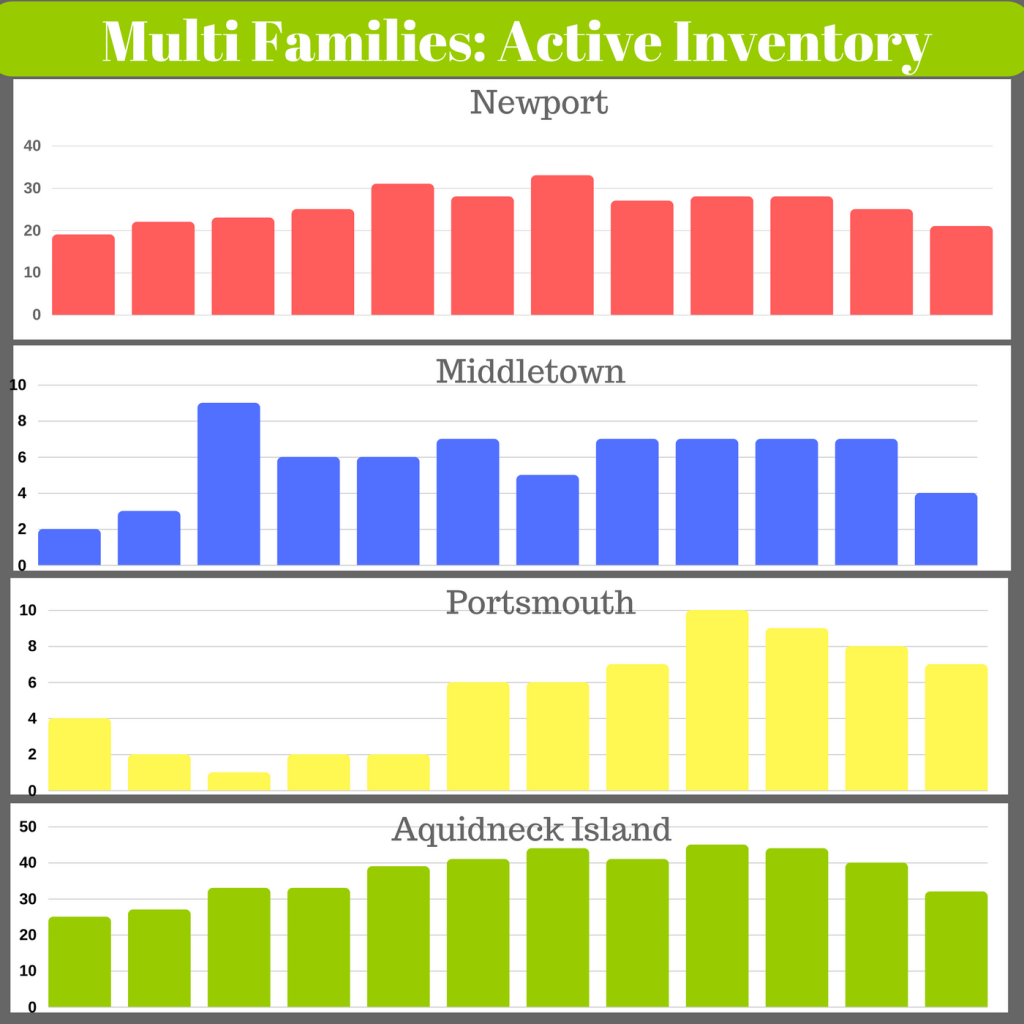 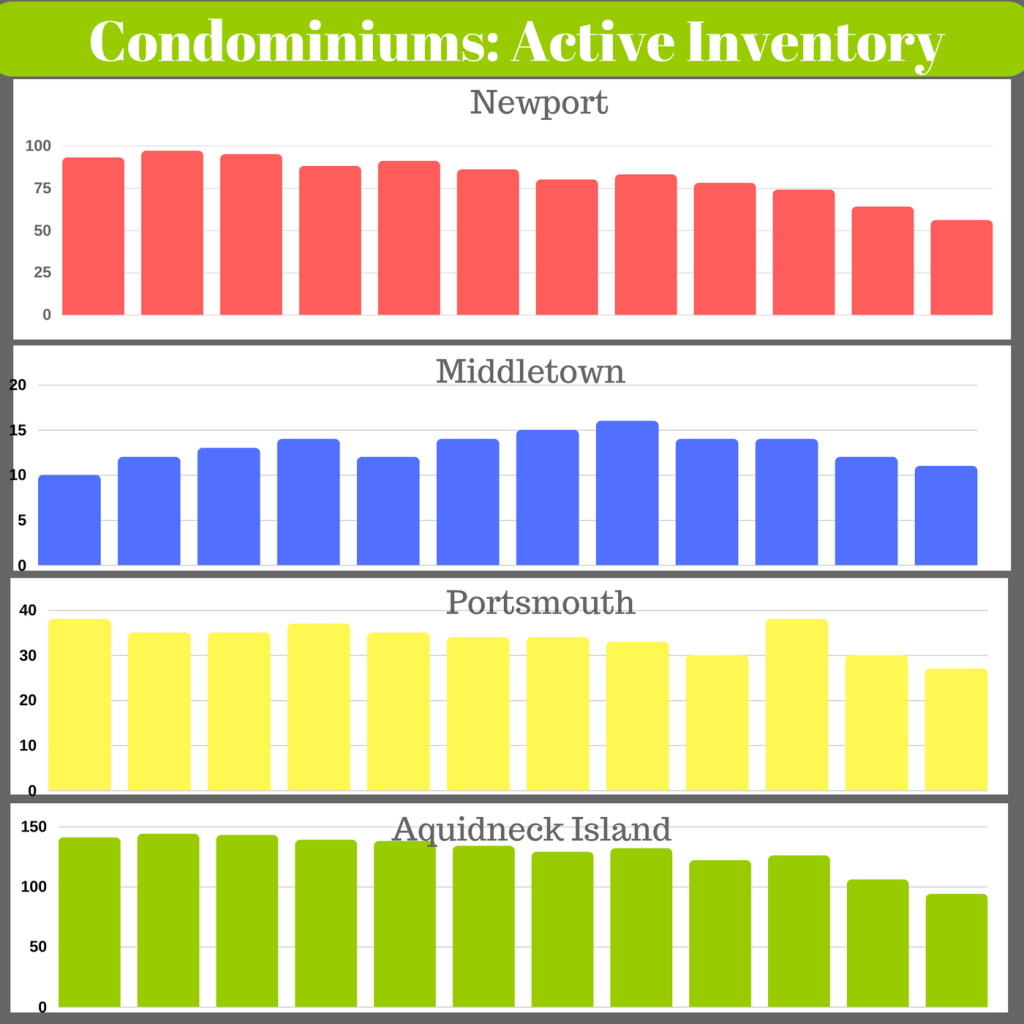 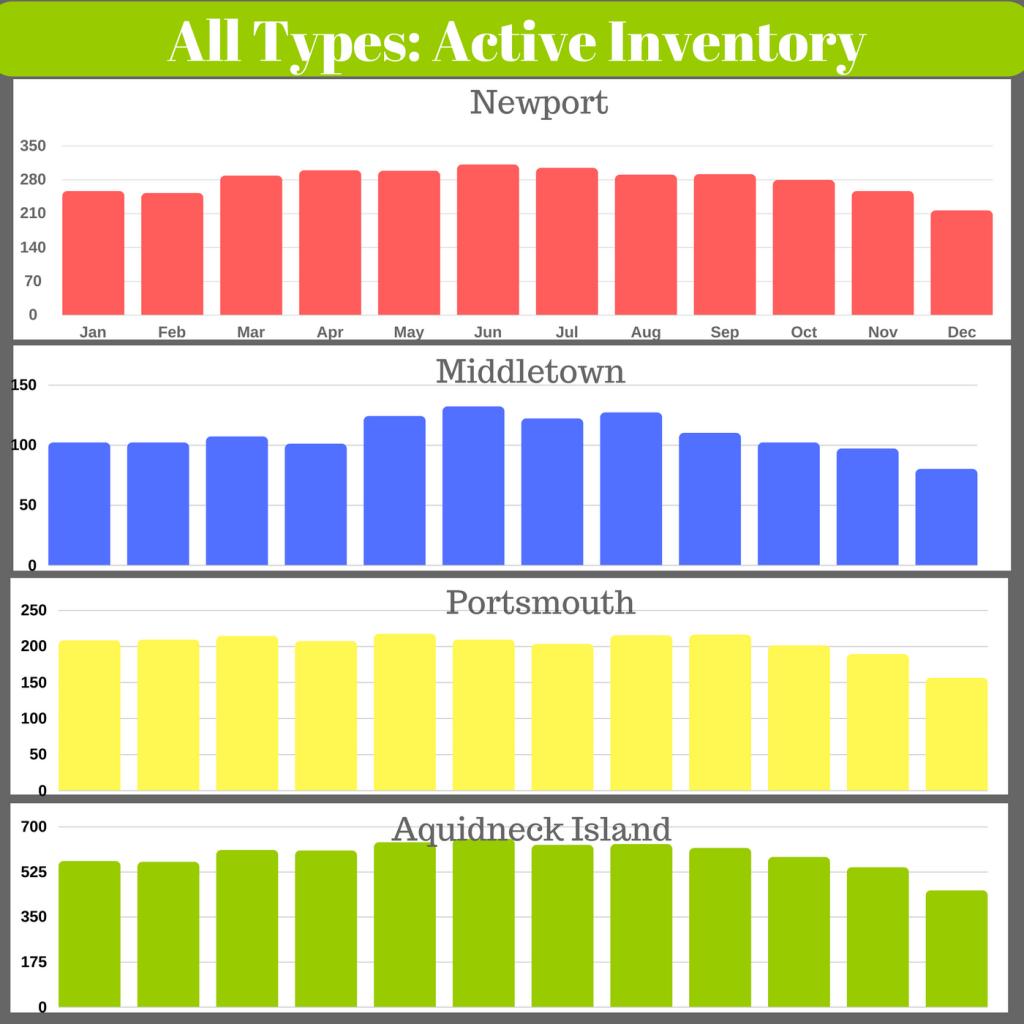 The absorption rate is how you translate inventories into real market conditions. Another term for absorption rate is “Months of inventory”. This rate shows demand by considering how long it would take existing inventory to sell. The idea is >6 months of inventory = a buyer’s market, <6 months = a seller’s market with 6 months = Market Equilibrium. (Personally I find 7 months to be equilibrium as a way to sift out overpriced and unsellable inventories from the equation) This year we were very much in a seller’s market, especially so for certain products and price points.

Sellers of Single families under $300,000 did very well this year with an average absorption rate of 4.83 months all year vs 6 months for all single family pricing 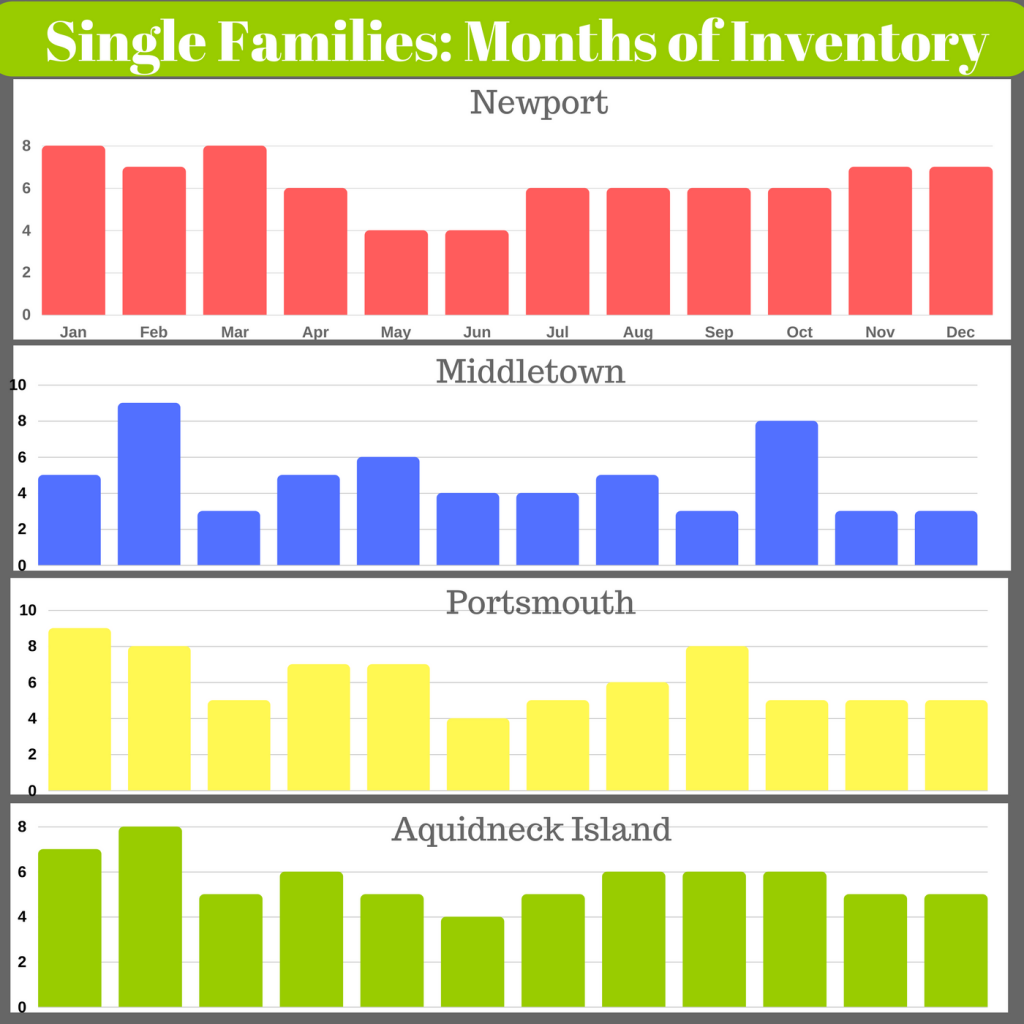 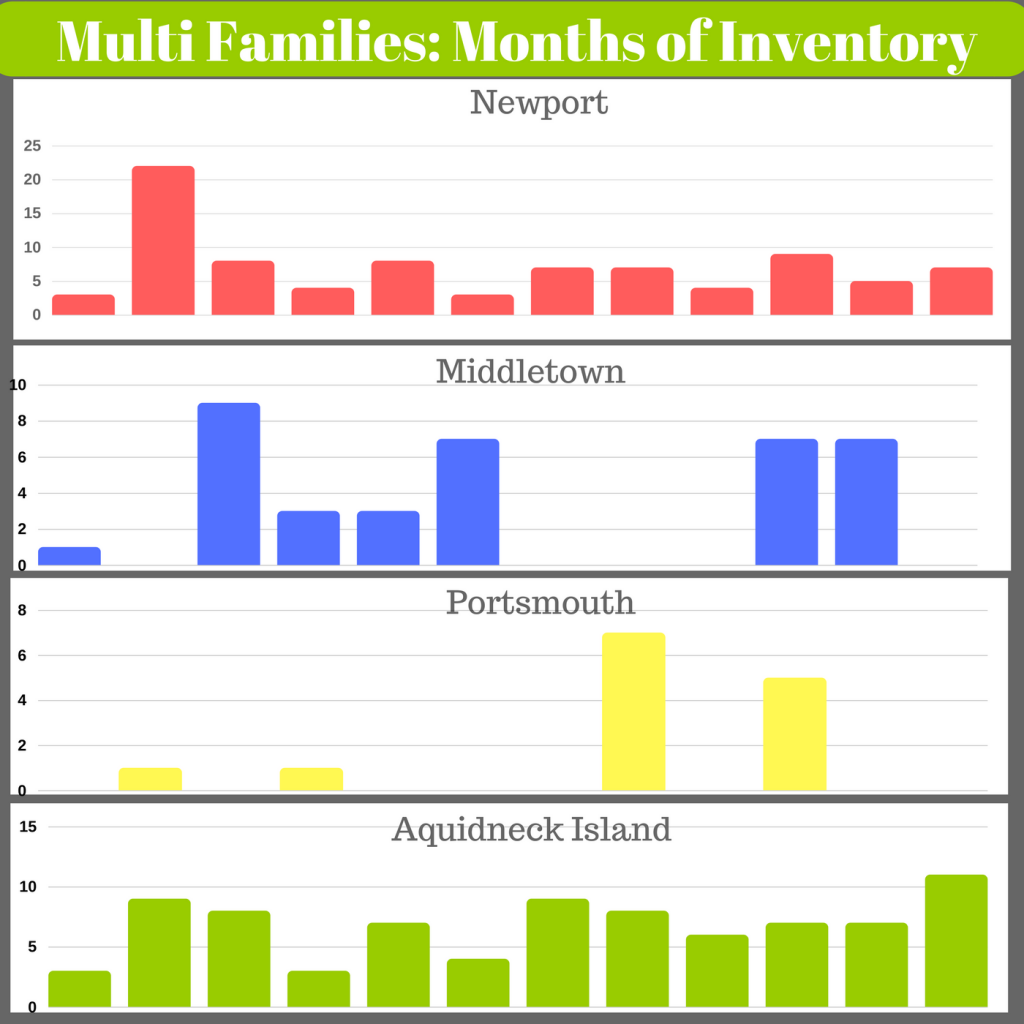 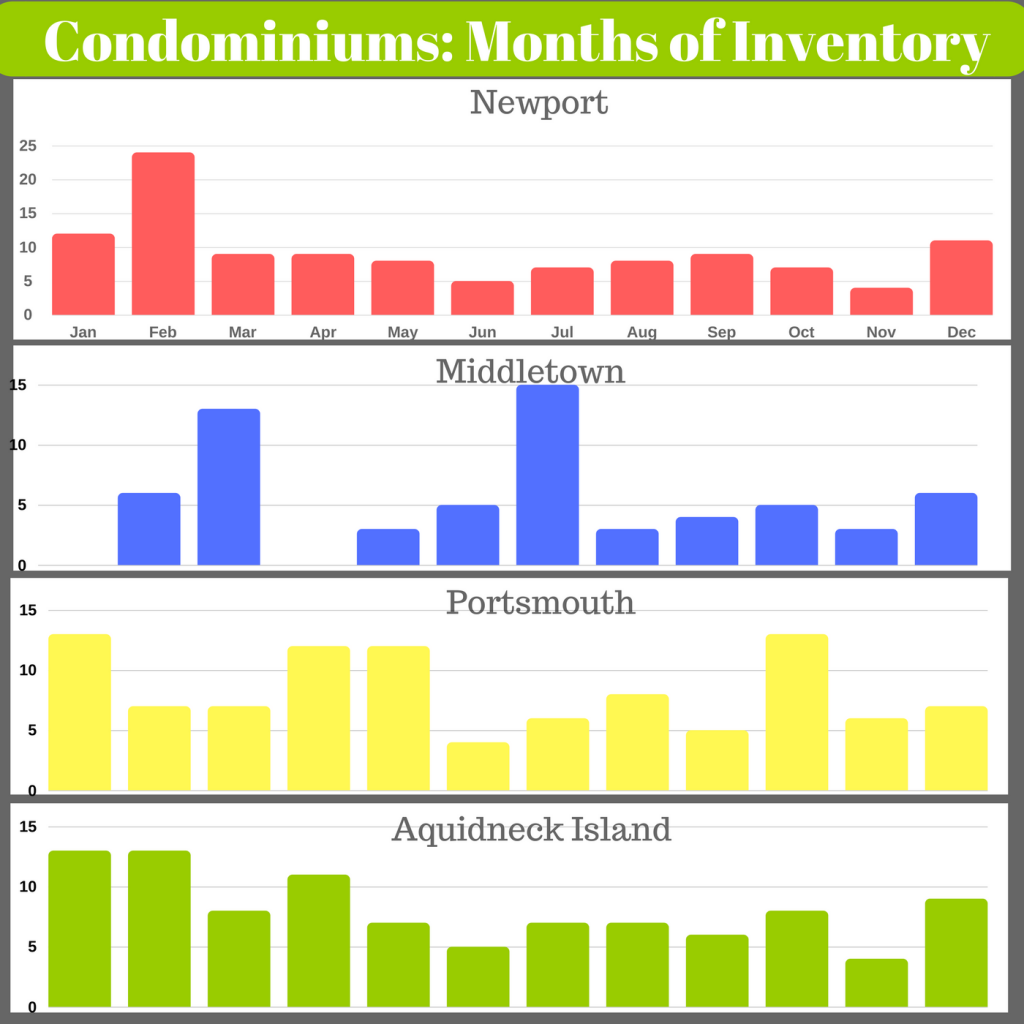 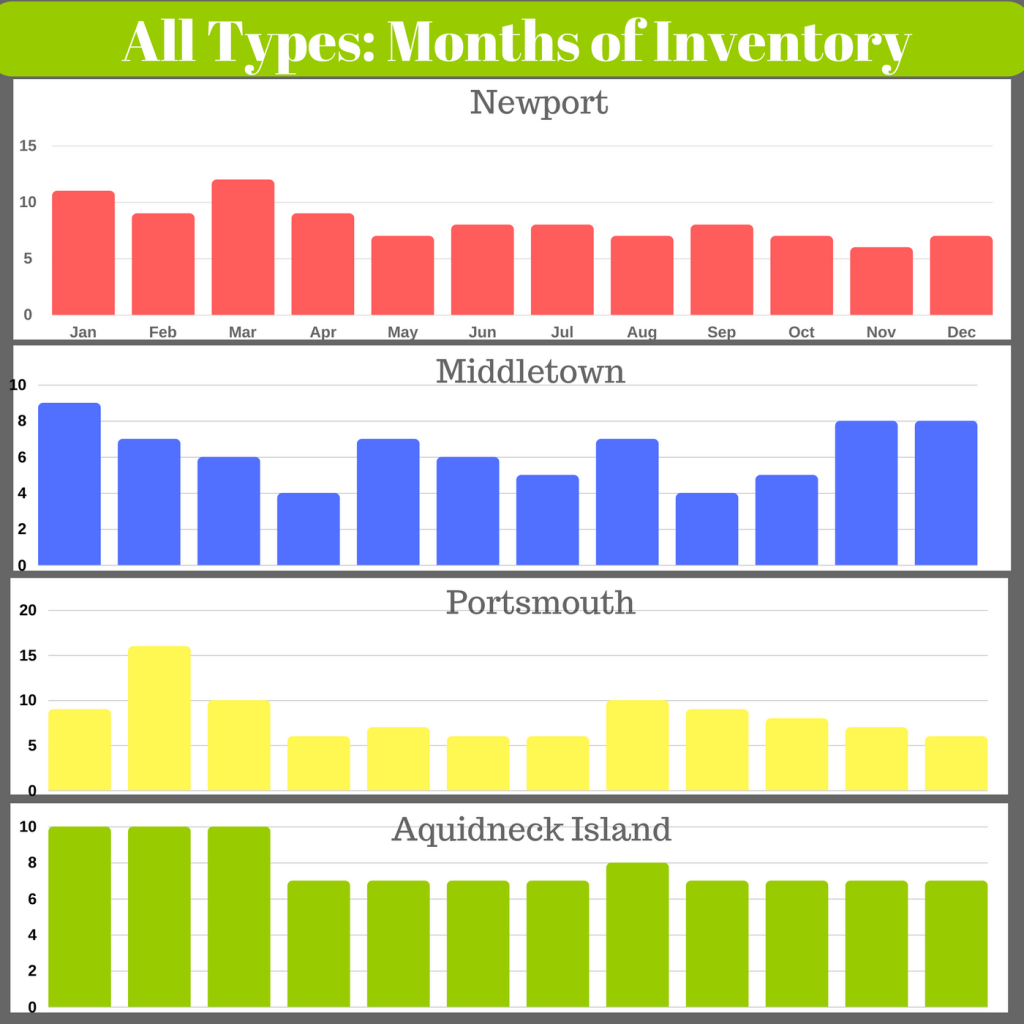 Major influences in the housing market for 2017 included inventory constraints, rental rates and increased vacation home demand. We can look forward to 2018 with inventory still playing a major factor as well as vacation home demand, increased rates and (hopefully) increased wages. Rental rates are already very high and with a continued addition of more vacation rentals to the market, I’d expect it to have a negative effect on nightly rates, helping keep annual rental rates level. Inventories will likely stay low, which will likely have positive forces on pricing.  I don’t believe interest rates will play a major role in demand in 2018 mostly due to inflation. With increased federal spending, the passing of the tax bill and monetary policy of the past decade, we could start to see inflation tick up right alongside interest rates. This increased inflation could help offset price increases in real estate, making ownership seem more affordable.  Baring a major unforeseen macroeconomic event, I expect real estate prices to revert to the mean, with continued growth, just at a slower rate.

Let me know your thoughts! Thank you to everyone in 2017 and I’m excited to see what 2018 will bring. Happy New Year!