Selling the Island Life: How to Get on TV 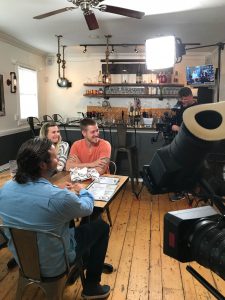 When HGTV came knocking in Newport last fall, I was lucky enough to answer. Scanning the area and interviewing potential candidates for its popular weekly “Island Life” series, the home and garden television network was looking for agents and their clients to showcase the benefits of living in or near our city by the sea. I had a unique advantage because I had filmed another episode of this show last year, so I immediately contacted my clients Brady and Michaelah Nicholson for this round. Brady is an agent with us, was born and raised on Aquidneck Island, and I’m kind of his mentor so it made sense to work together on this. Plus I know Michaelah pretty well, and she works for Diego’s Restaurant so her experience in hospitality was a bonus.

The producers did initial interviews over Facetime, asking random questions like “What do you love about Newport?” “What kind of colors describe Newport?” They were looking for descriptive language, to see how we’d react on camera. That part wasn’t weird, because they made us feel very comfortable. Plus the show is a little more centered to the buyer, so their interview was a little longer.

I thought it would be a fun thing to do, so when I was told we were chosen, I went with it. Filming took four days, for a 24-minute show. It was a few days after my son was born last September, which was tricky, but luckily my wife was cool with it! Being in front of the camera took a little getting used to, too, but it was fun and fairly easy listening.

SELLING NEWPORT WAS THE EASY PART

We shot different scenes across town, like Sail Newport, Ft. Adams, Harry’s Burger Bar and we got lobster rolls at Flo’s which was cool. There is no script, so it was kind of off the cuff, and we were just talking about Brady and Michaelah finding their first house. They ended up buying a duplex in the North End, which they were already living in when filming began. We reenacted the home-buying process for the show, taking Brady and Michaelah to other homes as well as the one they bought. We even filmed at their home, while they were renovating one side and living in the other, and had lunch with the crew. It was staged like a tenant was living there, but Brady told me they just stuffed things in the closet to clean up! 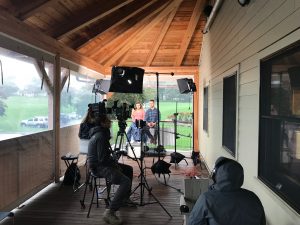 It was interesting to see how a production goes, and how much work goes into 24 minutes of airtime. There were about six crew, and everywhere you go there are extras, with waivers and sign-offs for each location. They had different camera tricks and were recording different sounds from the area, and then they splice that with the filming. I’m most nervous about that splicing. Brady said it was kind of foreign for both of them since they had never done this kind of thing before. But we get to see the show and how they piece it together, with short snippets, which makes it work pretty well. I think we’re all just anxious and excited to see it live!